Our film industry is plagued with films that constantly harp on genres like horror and comedy. These types of films are undeniably raking all the big money from the masses. Not many producers would be willing to part their money in doing niche films. It will always be about who can get the most money of their blockbuster films.

So it is a refreshing sort that Talentime emerges from the pile of cliché films.

For me, satire is the highest form of critiques and I am glad that Yasmin Ahmad hasn’t moved from that field. Not many people would want to produce that kind of films and the few in the list includes the great P. Ramlee.

The issues that are touched by Yasmin Ahmad include the misunderstanding between the Malays, the Indians and the Chinese, the fact that the Bumiputeras are constantly being helped by the Government, the constant association that if you are a Muslim, you have to be Malay, which is clearly misguided. There are other issues that few of them really need you to read (or maybe listen) between the lines.

The actors and the actresses are certainly commendable for their effort in making this film a success. Mahesh, Pamela Chong and Jaclyn Victor should be noticed for their good debut which certainly has an impact on the film. Yasmin Ahmad certainly has an eye for the best actors which suit her film. Like she said, she always searches for the ‘charisma’ when she scouts for the actors and she did it again with this film.

The songs that are chosen for the film are certainly entertaining. But what catches me the most is the song O Re Piya which really suits that scene is the film. I had been humming the song after the film finished until my friends asked me to stop.LOL.

If you are used to watching Yasmin’s advertisments, this film is like her ads which spans for two hours. :)

Three. That’s the number of students that either hurt themselves or had a lack of minerals that they had to be brought to the staff room and be rescued by the teachers. I had just finished my two period lessons when I came to the staff room and a boy was trying very hard to breathe. The teachers tried their best to help the boy breathe that no matter what your major is, everyone was a doctor at that time. Or maybe their experience in raising their children certainly helped them. By the way, the boy’s hands and legs were numb that we had to literally carry him to the car to be brought to the clinic.

What I could see at that time was that the teachers’ paternal instinct really helped in dealing with that situation. Teachers are certainly student’s second parent. I dread to think what would happen if the teachers just left the boy gasping for his breathe, all alone.


My back ached when I helped to carry him. I feel like an old man.Sigh. Anlene, anyone?

credit to Bill Watterson
Posted by Syafiq at 6:22 PM 3 comments:

I want to go to PLKN!

Diana Danielle is now a PLKN trainee at Sepang. How can I apply to be a trainer there huh?

We have always been fascinated with flying. We keep on designing and making the fastest and technologically-advanced airplanes. But being slow is not a bad thing actually.

At least that’s what I thought when I went to the 1st Putrajaya International Hot Air Balloon Fiesta 2009.

They were quite creative with the designs too.

For anyone who’s going after this, make sure you are there before 7.30 am or you will miss the takeoff. Yes, that’s right people, 7.30 am.

You can also take the balloon ride for RM10 per person though you will only be 10 meters off the ground, tops. They won’t be taking you around Putrajaya, if that’s what you hoped for. Want a drink anyone?

Go to my flickr for more.
Posted by Syafiq at 5:54 PM No comments:

The other day, I watched Krishh at TV3 as I don’t have Astro at my Rawang’s house. The movie is quite ok la. Maybe it was because that was my only choice. Or maybe, I’m interested in superheroes and aliens. So today I took a picture of an alien. So how? Scared already huh?hehehe.

Even as a 23 year old, I still love to watch cartoons. I even watched most of the products by Pixar and Dreamworks at the cinemas. I think this is because I have been interested in cartoons and comics even before I started going to school. So just imagine my joy when I knew that there is going to be a Dragonball movie!

And today I watched the movie.

And not really impressed.

I wonder who wrote the script…most of the scripts are so cheesy that I thought I was eating a rotten cheese. It was like watching a teen movie where this guy has this crush on a girl but too afraid to say it. What a cliché…

Most of the characters are not even properly developed. The plot of the movie doesn’t help to show us how the characters develop. What I know from the characters is that Cici likes to kiss Goku. Luckily Cici is one hot babe.hehe.

For those who have been with Dragonball for almost twenty years, believe me, this movie wont be anywhere near your expectation. Just stick to the comics, please.

A great movie? No

A movie to watch while eating popcorns? Yes 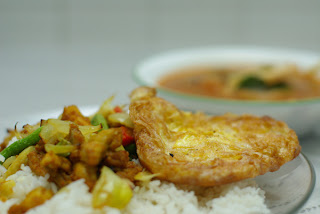 I cooked that egg. That’s the only thing that I’m good at anyway.

Not the questions that you actually want

As a teacher, it is normal to be bombarded with questions from the students.

But some questions are not the one that we would like to listen to.

I’m teaching English to two classes, one is an advanced class and the other one is a lower intermediate class. The one I’m about to talk about is the latter. Not many of them can really understand English actually. As a teacher, I’m supposed to be helping them to acquire the language so I hardly give them translations of what I have said. So during the first week, I only talked to them in English. I know this is quite hard for them but as people say, no pain, no gain. After finishing the lesson for the day, as I was putting my things back into my bag, the class monitor asked me, ‘Cikgu, cikgu tak tau cakap BM ka?’ (that is like asking a doctor whether he knows how to do a surgery). I don’t know how to reply to that so as a simple answer, I smiled.

During my lesson, I like to walk around and give them a personal explanation as I know most of them are too shy to admit that they do not know. So as I was explaining to one of my lower intermediate students, of them suddenly said, ‘ , ’. I was like, what is he trying to say. So I asked him back, ‘what ?’ and he answered ‘ , ’. Only after that I knew that he was asking me whether I come from or as I hardly speak in BM with them. I don’t know whether to take that as compliment or an insult. So again, I smiled to him.

After the failed attempt in my previous 2 blogs, http://fakedrama.blog.friendster.com/ and daudsvillage.blogspot.com, im now starting a new blog after 2 two year hiatus. hope this blog serves anyone who is reading it well.thanks.
Posted by Syafiq at 6:08 PM No comments: